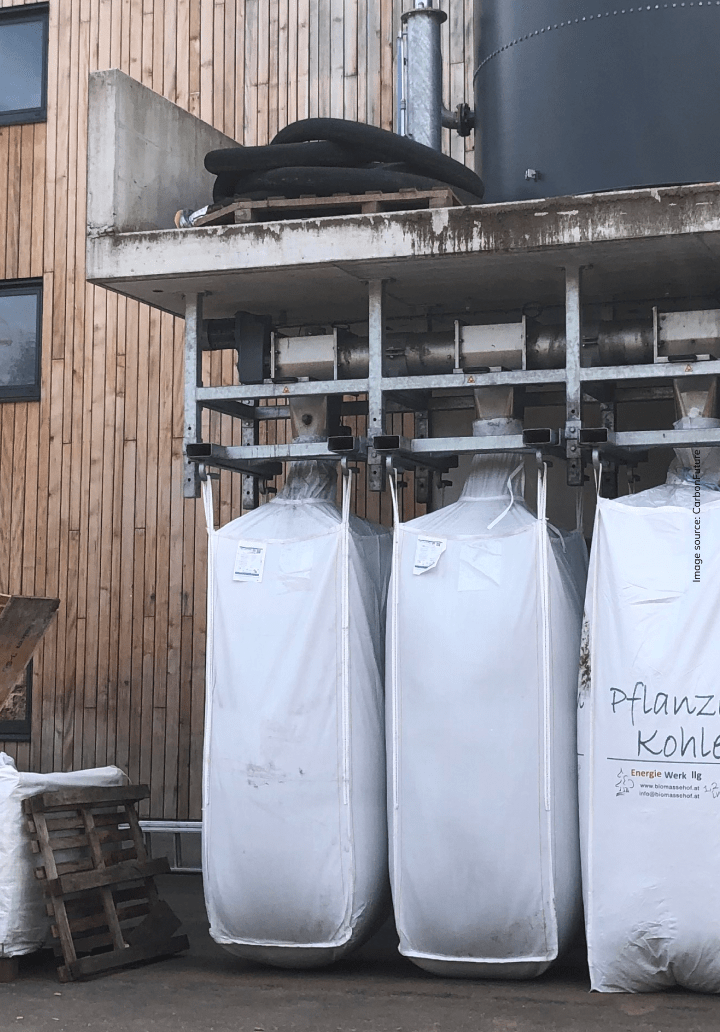 One man’s trash is another man’s treasure

Biochar, namely, consists of none other than the by-products or residuals, mainly stemming from forestry or agriculture. By-products and residuals, which are used to produce biochar, can be any organic material from plants, such as old branches and twigs, sawdust, or agricultural waste, which contain large quantities of carbon.

The process to stop that carbon from re-entering the atmosphere involves heating up the biomass to over 400°C in a closed setting, under the near absence of oxygen. In this process, called pyrolysis, about half of the carbon compounds of the biomass are converted into biochar. The end result is a kind of porous charcoal, made up of more than 65% carbon. It is very durable and resists biological or chemical decomposition. If biochar is not burned but rather remains in the soil or is used in other long-lasting material applications, carbon is removed from the natural carbon cycle and a carbon sink is created. Another plus of pyrolysis is that the by-products (pyrolysis oils or process gases) are used to generate energy and heating.

A lot of benefits for such an unassuming product. Typically used in agriculture it improves the soil environment. Increased water retention, increased nutrient availability beyond a fertiliser effect, and the reduction of leaching of nitrogen into groundwater are only some of the benefits of biochar is applied to soils.

More recently, the development of using biochar for more permanent products gained momentum. From paints, building materials, insulation materials over to textiles and other high-tech materials - anything seems possible. Used in building materials, for instance, it has the ability to replace scarce resources, such as sand, while storing carbon for the long run.

Pioneers from the Black Forest

Our partners at Carbonfuture, which are located in the deep south of Germany surrounded by the Black Forest, are the pioneers in creating the first fully documented and verified biochar-based carbon sink. This makes biochar a carbon sink, which is qualified to become a financing instrument on a commercial level for the broader public.

The idea of founding their own company came only after the four founders, Dr. Hannes Junginger, Dr. Matthias Ansorge, Andreas Hölzl and Hansjörg Lerchenmüller, saw the potential of their research after receiving wide support among experts during several symposiums in 2019. Their research on how to properly reward efforts against global warming, by conceptualizing a scalable framework for carbon sink financing using blockchain, seemed to hit the right nerve among the audience. Today, they are bringing together different people and businesses on their website. They provide easy access to a powerful ecosystem of partners interested in making a difference with the help of biochar.

Providing a unique sense of security through blockchain & third-party verification

The purchase of one Carbonfuture Carbon Sink Credit from the company effectively removes one tonne of CO₂ from the atmosphere and stores it for over 100 years. Scientists even suggest that biochar can potentially be stored in the ground for thousands of years.

What makes our partners at Carbonfuture special in their approach, is the selection of portfolios financed by purchasing carbon offsets. Their focus is on the actual carbon reductions achieved and not on the what if’s of potential emission reductions. To do so Carbonfuture takes the entire life cycle of biochar into account when calculating the actual carbon reductions of each Carbon Sink Credit. From the production process until the final use in the soil, all emissions are included. Each Carbon Sink Credit is then documented on a low-energy digital platform – the Carbonfuture Hyperledger Blockchain.

Each Carbonfuture Carbon Sink can be identified by its individual “cf-certificate”. When it comes to the selection of biochar producers, Carbonfuture is willing to go the extra mile to make sure that biochar is of premium quality and poses no harm to health or the environment. All of our partners’ biochar producers are obliged to acquire both the European Biochar Certificate (EBC) and the EBC C-sink certification. The “cf-certificate” documents that all credits are based on independently EBC-cerrtified biochar.

A crucial step of the whole process is proper documentation. After a bag of biochar is sold to the end-user, the biochar wholesaler and the end-user must document the use of the biochar on the Carbonfuture platform and agree upon Carbonfuture’s conditions. This requirement and the different levels of the “cf-certificate” provide a unique sense of security for anyone wanting to invest in Carbon Sink Credits at Carbonfuture, while also ensuring that none of the credits are counted more than once.

Besides the large potential of biochar and its co-benefits, the technology could run into issues when it comes to scaling up in the foreseeable future. For the end-user biochar is still relatively expensive and wholesalers see little ability to market the product when farmers cannot afford to utilize biochar on their fields. That is why Carbonfuture puts the end-user, wholesaler and producers of biochar in the main focus in order to fairly compensate them for their efforts of creating a permanent carbon sink in tackling climate change.

Apart from biochar being quite expensive at the moment, the biochar industry is not the only one having an eye on the by-products and plant waste stemming from agriculture or forests. The dawn of new technologies, such as Bio-energy or BECCS, could increase the competition for residual and waste biomass - a survival of the fittest in the carbon offset market.

In order to make the most out of biochar’s potential, Carbonfuture, for one, chooses to only work with premium quality products and suppliers, which are pushing the sustainable development of biochar as an industry. For another, they are closely collaborating with other pioneers from the still very young biochar sector, finance sector, academia, IT and corporates to realize their clear mission: Taking CO₂ out of the atmosphere and putting carbon back into the soil in order to reach the 1.5-degree target and to improve degraded soils.